Freeze drying is the process of dehydrating frozen foods under a vacuum so the moisture content changes directly from a solid to a gaseous form without having to undergo the intermediate liquid state through sublimation. In this process, the product maintains its original size and shape with a minimum of cell rupture. Removing moisture prevents a product from deteriorating at room temperature.
The process is used for drying and preserving a number of food products, including meats, vegetables, fruits, and instant coffee products.
The dried product will be the same size and shape as the original frozen material and will be found to have excellent stability and convenient reconstitution when placed in water. Freeze dried products will maintain nutrients, color, flavor, and texture often indistinguishable from the original product.
Depending on the product and the packaging environment, freeze dried foods are shelf-stable at room temperature for up to twenty-five years or more, if canned, and between 6 months to 3 years if stored in a poly-bag container.

The main determinant of degradation is the amount and type of fat content and the degree to which oxygen is kept away from the product.

The Benefits of Freeze-Drying

The process of lyophilisation was invented in 1906 by Arsène d'Arsonval and his assistant F. Bordas at the laboratory of biophysics of Collège de France in Paris.[1][2] However, dehydration was already used by the Indians in the Andes in the 13th century to make chuño.
Modern freeze-drying was developed during WWII. Blood serum being sent to Europe from the US for medical treatment of the wounded required refrigeration, but because of the lack of simultaneous refrigeration and transport, many serum supplies were spoiling before reaching their intended recipients. The freeze-drying process was developed as a commercial technique that enabled serum to be rendered chemically stable and viable without having to be refrigerated. Shortly thereafter, the freeze-dry process was applied to penicillin and bone, and lyophilization became recognized as an important technique for preservation of biologicals. Since that time, freeze-drying has been used as a preservation or processing technique for a wide variety of products. These applications include the following but are not limited to: the processing of food,[3] pharmaceuticals,[4] and diagnostic kits; the restoration of water damaged documents;[5] the preparation of river-bottom sludge for hydrocarbon analysis; the manufacturing of ceramics used in the semiconductor industry; the production of synthetic skin; the manufacture of sulfur-coated vials; and the restoration of historic/reclaimed boat hulls.

In a typical phase diagram, the boundary between gas and liquid runs from the triple point to the critical point. Freeze-drying (blue arrow) brings the system around the triple point, avoiding the direct liquid-gas transition seen in ordinary drying time (green arrow).
There are four stages in the complete drying process: pretreatment, freezing, primary drying, and secondary drying.

Pretreatment includes any method of treating the product prior to freezing. This may include concentrating the product,formulation revision (i.e., addition of components to increase stability, preserve appearance, and/or improve processing), decreasing a high-vapor-pressure solvent, or increasing the surface area. In many instances the decision to pretreat a product is based on theoretical knowledge of freeze-drying and its requirements, or is demanded by cycle time or product quality considerations.[6]

In a lab, this is often done by placing the material in a freeze-drying flask and rotating the flask in a bath, called a shell freezer, which is cooled by mechanical refrigeration, dry ice and methanol, or liquid nitrogen. On a larger scale, freezing is usually done using a freeze-drying machine. In this step, it is important to cool the material below its triple point, the lowest temperature at which the solid and liquid phases of the material can coexist. This ensures that sublimation rather than melting will occur in the following steps. Larger crystals are easier to freeze-dry. To produce larger crystals, the product should be frozen slowly or can be cycled up and down in temperature. This cycling process is called annealing. However, in the case of food, or objects with formerly-living cells, large ice crystals will break the cell walls (a problem discovered, and solved, by Clarence Birdseye), resulting in the destruction of more cells, which can result in increasingly poor texture and nutritive content. In this case, the freezing is done rapidly, in order to lower the material to below its eutectic point quickly, thus avoiding the formation of ice crystals. Usually, the freezing temperatures are between −50 °C and −80 °C (-58 °F and -112 °F) . The freezing phase is the most critical in the whole freeze-drying process, because the product can be spoiled if improperly done.

Amorphous materials do not have a eutectic point, but they do have a critical point, below which the product must be maintained to prevent melt-back or collapse during primary and secondary drying.

During the primary drying phase, the pressure is lowered (to the range of a fewmillibars), and enough heat is supplied to the material for the ice to sublime. The amount of heat necessary can be calculated using the sublimating molecules’latent heat of sublimation. In this initial drying phase, about 95% of the water in the material is sublimated. This phase may be slow (can be several days in the industry), because, if too much heat is added, the material’s structure could be altered.

In this phase, pressure is controlled through the application of partial vacuum. The vacuum speeds up the sublimation, making it useful as a deliberate drying process. Furthermore, a cold condenser chamber and/or condenser plates provide a surface(s) for the water vapour to re-solidify on. This condenser plays no role in keeping the material frozen; rather, it prevents water vapor from reaching the vacuum pump, which could degrade the pump's performance. Condenser temperatures are typically below −50 °C (−58 °F).

It is important to note that, in this range of pressure, the heat is brought mainly by conduction or radiation; the convection effect is negligible, due to the low air density.

The secondary drying phase aims to remove unfrozen water molecules, since the ice was removed in the primary drying phase. This part of the freeze-drying process is governed by the material’s adsorption isotherms. In this phase, the temperature is raised higher than in the primary drying phase, and can even be above 0 °C, to break any physico-chemical interactions that have formed between the water molecules and the frozen material. Usually the pressure is also lowered in this stage to encourage desorption (typically in the range of microbars, or fractions of a pascal). However, there are products that benefit from increased pressure as well.

After the freeze-drying process is complete, the vacuum is usually broken with an inert gas, such as nitrogen, before the material is sealed.

At the end of the operation, the final residual water content in the product is extremely low, around 1% to 4%.

If a freeze-dried substance is sealed to prevent the reabsorption of moisture, the substance may be stored at room temperature without refrigeration, and be protected against spoilage for many years. Preservation is possible because the greatly reduced water content inhibits the action of microorganisms and enzymesthat would normally spoil or degrade the substance.

Freeze-drying also causes less damage to the substance than other dehydrationmethods using higher temperatures. Freeze-drying does not usually cause shrinkage or toughening of the material being dried. In addition, flavours, smells and nutritional content generally remain unchanged, making the process popular for preserving food. However, water is not the only chemical capable ofsublimation, and the loss of other volatile compounds such as acetic acid (vinegar) and alcohols can yield undesirable results.

Freeze-dried products can be rehydrated (reconstituted) much more quickly and easily because the process leaves microscopic pores. The pores are created by the ice crystals that sublimate, leaving gaps or pores in their place. This is especially important when it comes to pharmaceutical uses. Freeze-drying can also be used to increase the shelf life of some pharmaceuticals for many years.

Similar to cryoprotectants, some molecules protect freeze-dried material. Known as lyoprotectants, these molecules are typically polyhydroxy compounds such assugars (mono-, di-, and polysaccharides), polyalcohols, and their derivatives.Trehalose and sucrose are natural lyoprotectants. Trehalose is produced by a variety of plant (for example selaginella and arabidopsis thaliana), fungi, andinvertebrate animals that remain in a state of suspended animation during periods of drought (also known as anhydrobiosis).

Pharmaceutical companies often use freeze-drying to increase the shelf life of the products, such as vaccines and other injectables. By removing the water from the material and sealing the material in a vial, the material can be easily stored, shipped, and later reconstituted to its original form for injection. Another example from the pharmaceutical industry is the use of freeze drying to produce tablets or wafers, the advantage of which is less excipient as well as a rapidly absorbed and easily administered dosage form. 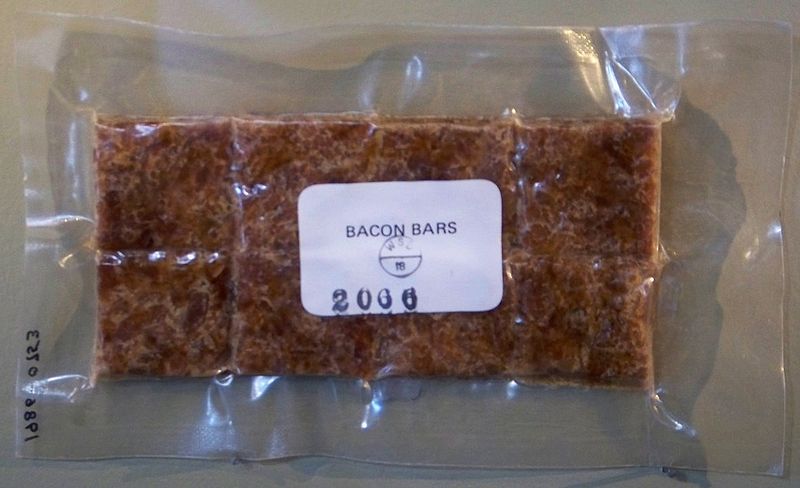 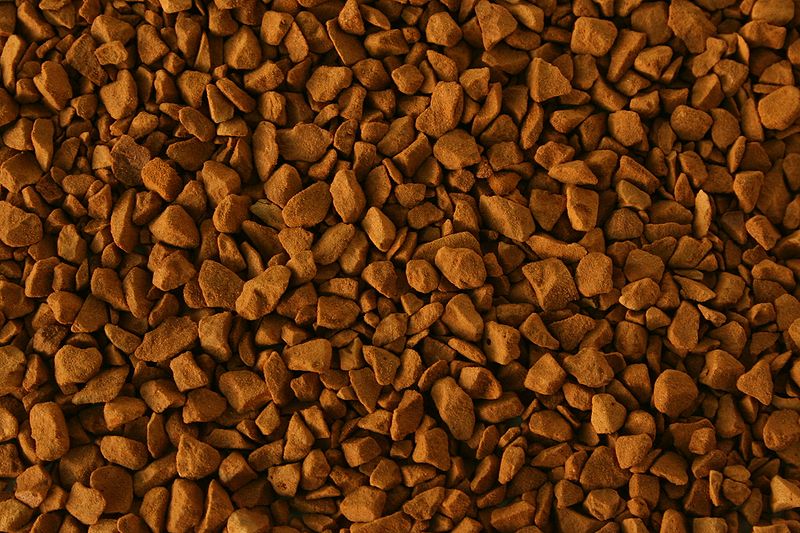 Although freeze-drying is used to preservefood, its earliest use in agriculturally based industries was in processing of crops such as peanuts/groundnuts and tobacco in the early 1970s. Because heat, commonly used in crop and food processing, invariably alters the structure and chemistry of the product, the main objective of freeze-drying is to avoid heat and thus preserve the structural and chemical integrity/composition with little or no alteration.[7] Therefore, freeze-dried crops and foods are closest to the natural composition with respect to structure and chemistry. The process came to wide public attention when it was used to createfreeze-dried ice cream, an example ofastronaut food. It is also widely used to produce essences or flavourings to add to food.

Because of its light weight per volume of reconstituted food, freeze-dried products are popular and convenient for hikers. More dried food can be carried per the same weight of wet food, and remains in good condition for longer than wet food, which tends to spoil quickly. Hikers reconstitute the food with water available at point of use.

Instant coffee is sometimes freeze-dried, despite the high costs of the freeze-driers used. The coffee is often dried by vaporization in a hot air flow, or by projection onto hot metallic plates. Freeze-dried fruits are used in some breakfast cereal or sold as a snack, and are an especially popular snack choice among toddlers,preschoolers, hikers and dieters, as well as being used by some pet owners as a treat for pet birds. Most commercial freezing is done either in cold air kept in motion by fans (blast freezing) or by placing the foodstuffs in packages or metal trays on refrigerated surfaces (contact freezing).

Culinary herbs, vegetables (such as vitamin-rich spinach and watercress), the temperature sensitive baker`s yeast suspension and the nutrient-rich pre-boiled rice can also be freeze-dried. During three hours of drying the spinach and watercress has lost over 98% of its water content, followed by the yeast suspension with 96% and the pre-boiled rice by 75%.[8] The air-dried herbs are far more common and less expensive. Freeze dried tofu is a popular foodstuff in Japan ("Koya-dofu" or "shimi-dofu" in Japanese). 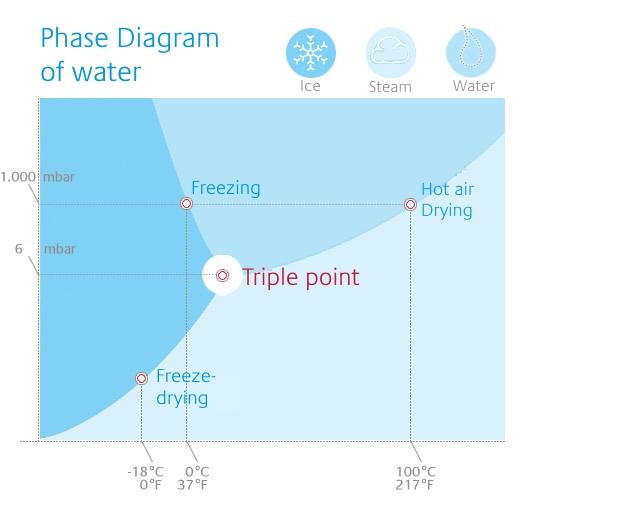